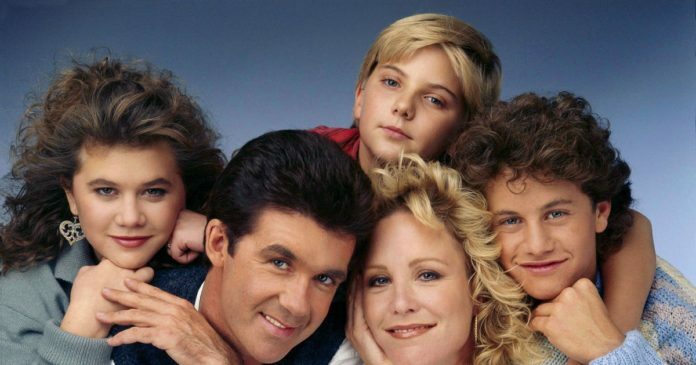 Remember when most primetime sitcoms weren’t vulgar, and when the whole family could relax around the television and laugh out loud together?

As a child of the 1970’s and 80’s, I certainly do. I grew up watching shows like Alf, Family Ties and The Cosby Show — all of which could be enjoyed without mom and dad needing to dive for the remote every two minutes. Yes, they contained edgy content from time to time, but that was the exception, not the rule.

The series is rated TV-G and was produced before sitcoms became saturated with jokes about sex.

In fact, most of the Growing Pains episodes even have positive lessons about life. (For example: Season 3, episode 8, in which the Seavers’ home is burglarized and they subsequently learn that life is more important than material possessions.) The series also showcases an intact, loving family and a father who isn’t a clueless buffoon.

This doesn’t mean every episode is OK for small children, as some involve adults themes and romance and the occasional mild language.

But it does mean you will find clean, original comedy, and you won’t find the trash that passes for sitcoms today.

Other new releases on Amazon Prime, Netflix and Hulu:

The Lake House (Netflix) – A long-distance romance develops between a man a woman through letters they mail in a magical mailbox. They soon discover they are living in separate years. Released in 2006, it is rated PG for some language and a disturbing image. Oct. 1

Robin Hood: Prince of Thieves (Netflix) – This 1991 PG-13 film is based on the tale of the mythical hero and raises the same question as that old tale: Was Robin Hood’s action ethical? It’s very violent, though, and contains brief strong language. Oct. 1.

Kicking & Screaming (Hulu) – Will Ferrell stars as an over-the-top parent/coach of a youth soccer team. Rated PG for thematic elements, language and some crude humor. Oct. 1.

The Miracle Season (Hulu) – A high school girls volleyball team makes a run at the state title after their star player is killed in an accident. Based on a true story. Rated PG for some thematic elements. Many parents would say this one is appropriate for children, too. Oct. 14.

Tim Tebow: On a Mission (Amazon Prime) – The faith and athletic career of the Heisman Trophy winner and football star is analyzed. (It was released in 2012, prior to his baseball career.) Oct. 1.

The Daniel Tiger Movie: Won’t You Be Our Neighbor? (Amazon Prime) – If you have young children who watch television, then you need to know about Daniel Tiger – the cartoon character who continued the positive tradition of Mister Rogers’ Neighborhood. My youngest son loves him. Oct. 17.

The NeverEnding Story (Netflix) – A boy discovers a world of gnomes, wizards and monsters when an old book comes to life. This 1984 movie is rated G but contains images that could frighten young children. Oct. 1.