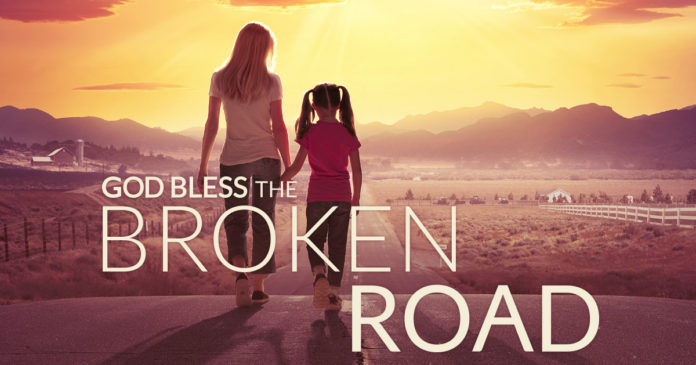 Fans of faith-based movies who also have a love for the U.S. military could be a bit busy in the next two months.

That’s because three films with military themes are set to be released in theaters, beginning with this weekend’s God Bless the Broken Road (PG) and followed by Unbroken: Path to Redemption (PG-13, Sept. 14) and Indivisible (PG-13, Oct. 26).

But while those latter two films tell the story of military personnel recovering from post-traumatic stress disorder, God Bless the Broken Road spotlights a family trying to get their life back on track following someone’s death.

The film follows a single mother named Amber Hill, who is struggling to find joy in life two years after her husband was killed in Afghanistan. Her waitress job at the diner doesn’t pay enough to make ends meet, and her young daughter – Bree – is rebelling against her mom’s down-and-out attitude about life.

It wasn’t always like this. Amber once had a strong faith – playing the guitar and leading the church choir — but turned from God when tragedy hit. Once a smiling Christian full of life, she rarely attends church nowadays.

“I tried putting my faith in God,” she tells her friends. “Look where it got me.”

Amber’s fortune goes from bad to worse when the bank evicts her from her home. Of course, most films have a happy ending, and God Bless the Broken Road is no different. (Don’t worry: I won’t spoil it for you.) She meets a race car driver who is going through a tough time, too. She also (finally) learns the details about her husband’s death. (Warning: That scene may lead you to tears if you have a military background.)

We learn that hardship and tragedy can be overcome with the support of others and with a strong faith.

God Bless the Broken Road has plenty of good messages for the moviegoer. We are reminded that neighbors all around us – military and non-military people – need encouraged in their daily life. We learn that hardship and tragedy can be overcome with the support of others and with a strong faith. Finally, we are reminded that military personnel and families have unique struggles that sometimes go unnoticed. We should be there for them.

The movie has its shining moments, but for the most part it’s an average faith-based film.

Rated PG for thematic elements and some combat action.

Joyce Dimaculangan - July 22, 2021
Two Christian charities in the UK have teamed up to highlight the global church response to the Covid-19 pandemic.

Joyce Dimaculangan - July 16, 2021
Christian college students are looking for help within the community to enhance Bible engagement and improve their prayer life.

Joyce Dimaculangan - July 10, 2021
Evangelist Nick Vujicic announced that he co-founded a bank that would give its profits to Christian non-profit organizations.

REVIEW: Why ‘Unplanned’ should not be rated R

REVIEW: ‘Instant Family’ has a great message about foster care, even...