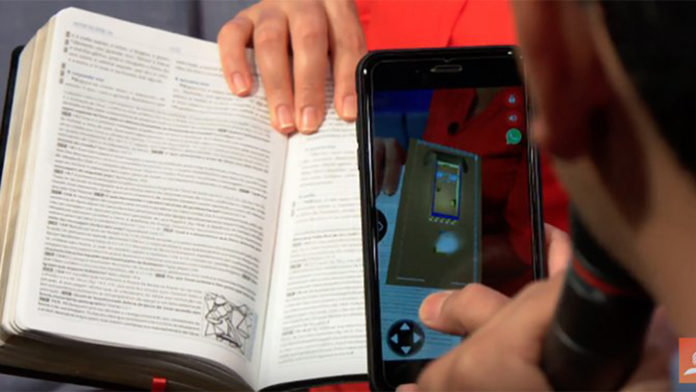 The Seventh Day Adventist Church launched a Missionary Bible that makes it possible to illustrate figures in the Book of Revelation using augmented reality.

The Book of Revelation has several scenes that are usually hard to imagine. But with the new smartphone app called Apocalipse RA, the readers will be able to see an animated illustration of an image of the Bible on their screens. For instance, to visualize the seven trumpets found in Chapter 8 of the Book of Revelation, position the phone above the text or scan an image, then you’ll see an image of seven angels and their trumpets on your screen. This new app is available for iOS and Android.

The Missionary Bible was presented to over 200 participants at the Annual Council of the Adventist Church in South America last November.

According to Carlos Magalhães, Adventist Church digital strategies manager in eight countries in South America, adding digital content helps in understanding the prophetic language of the Bible. He added that the app enables the readers to understand the printed text better and retain the information for a longer period. “They may forget some written elements, but the image stays in his/her mind.”

The Missionary Bible was presented to over 200 participants at the Annual Council of the Adventist Church in South America last November. It is a practical tool for people who are directly involved in providing Bible studies. These can be the missionary pairs, volunteer evangelists, and Bible class instructors. “You have a chain study: a passage that is connected to another passage. And with that connection, you have a comment in the footnote. You don’t need to use several materials. All you need to give studies is focused in one Bible,” said Everon Donato, Adventist Church Personal Ministries Director for eight countries in South America.

Donato also said this new resource would make it easier for people to understand what John is saying in the Book of Revelation. The Bible study will likewise be simpler, more practical, and more instructive not only for the instructor but also for the students.

By February 2019, about 500,000 copies of the Missionary Bible will be available in Spanish and Portuguese. These copies will be given to pastors in Adventist churches, though people who are involved in the mission will be given priority.

Chinese Officials Ban One of the 10 Commandments